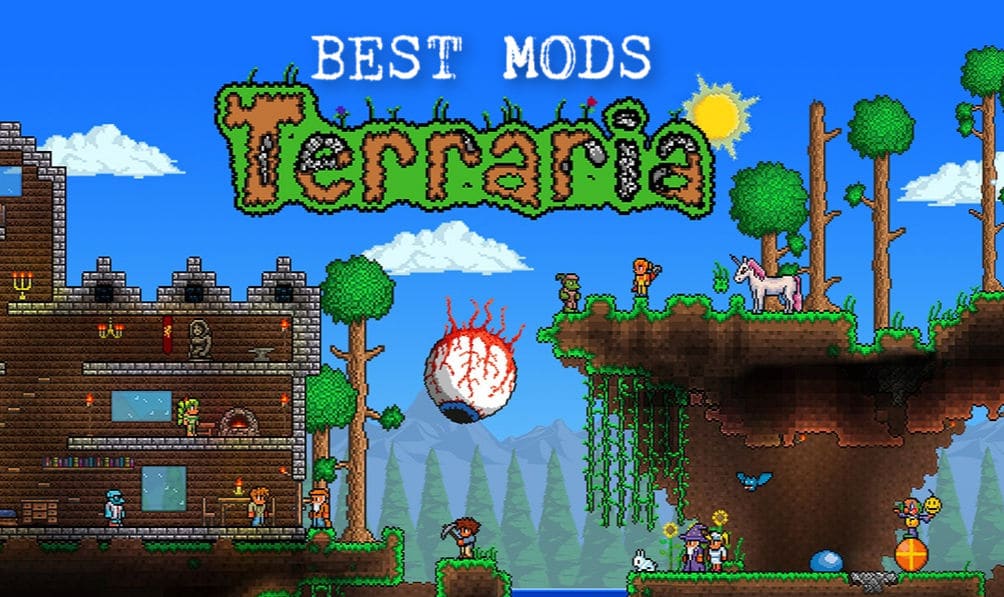 Terraria is a fantastic game for those who love survival, crafting, and old-school 2D adventuring. It is, however, arguably even better when you’re willing to play around with some of the things that weren’t including in the base game. Terraria is, like many other games, definitely one that is best played with mods. Below are a few of the best Terraria mods out there, ranging from RPG conversions to mapping tools that will increase immersion, provide guidance, and even allow players a chance to play the game far beyond its standard end-game.

Thorium is one of those mods that really goes above and beyond. It takes the vanilla version of the game and adds more of almost everything, with a huge spike to the endgame difficulty level as well. While there are plenty of conversions like Thorium – including a few on this list – Thorium’s probably the best across the boards. Give it a shot if you’re looking for a way to extend your play time or if you find the boss battles in the game to be a little on the easy side.

N Terraria is one of the more interesting mods out there because it takes what exists and gives it a new twist. N Terraria transforms the game into a proper RPG, with classes, quests, and even NPC companions. While it’s probably not going to make the game into an AAA experience for you, it will nonetheless breathe new life into the program. It’s a good fit for those who have always loved the systems of Terraria but who have wished that it provided a little more guidance.

Terria is really lacking in the mapping department. Fortunately, there are a handful of mods that fix this problem for the most dedicated of explorers. TerraFirma is perhaps the best of these mods, allowing users to generate a full map of their world. While it gets rid of some of the mystery of exploration, it definitely makes it easier for a player to plan out his or her next moves. It’s a good mapping tool for the generally curious as well as those who are stuck trying to figure out where to go next.

Calamity is another mod that just adds a ton of stuff to the game. What makes this mod so special is that the stuff added is actually really good – it’s hard to go back to the base item pack after playing around with what you’ll find in here. It’s a fine collection of new items, ores, and even characters to play around with, so it takes some time to really explore the depth of this one. There are always new surprises around the corner with Calamity, especially as the developer seems happy to listen to fans and add in new content.

Another fantastic RPG mod, Super Terraria World turns the game into a throwback to SNES-era role playing games. Probably one of the biggest full mods of the game, it really feels like you’ve found a long-lost RPG from the 1990s. Though it’s somewhat imperfect, the sheer amount of work that’s gone into this mod is really astounding. If you’re a fan of RPGs or you’ve ever wished that Terraria would give you something more robust to do than hunt for bosses, this is probably a great fit for you. It’s big enough that it will eat your time, so plan accordingly.

Tremor is one of the more common mods used on Terraria, adding in a ton of new content without doing much to break the base game. While there are several things that it adds that are also added elsewhere, it feels like the real selling point of Tremor is the expert-mode treasure that can be found. This treasure is a reward for those who would take the most risk and put up with the worst the game has to offer – something that often feels lacking in the vanilla version of the game. Tremor may not be the best overall mod, but it’s the one that offers dedicated players something special.

One of the more frustrating parts of Terraria has often been in the end-game. It’s not just a Terraria problem – it’s a problem with most survival/crafting games out there. Once you reach the top tier, there’s just not much to do. Pumpking’s Mod helps to solve this problem by adding a ton of post-Moon Lord content for players. It’s exactly what experts players have been looking for and a great addition to those who are worried about the longevity of the game. If you’re starting to run out of things to do in the game, this is one of the best mods in Terraria.